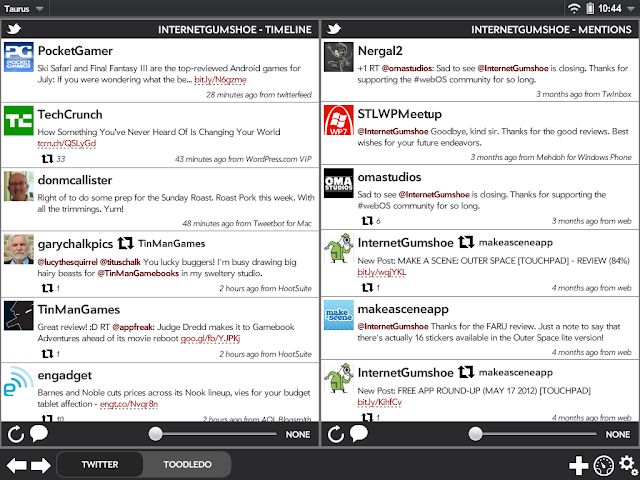 Taurus is a multitasking social/media application and is released by OMA Studios.

“Taurus is a social networking app geared towards multi-tasking and productivity. Using a unique dashboard-and-column system, content is viewed in a way that suits you.” When you first open Taurus, you will have a blank canvas, and you will need to add accounts to get started with the application. The application currently supports: Twitter, Facebook, LinkedIn, Google Reader and ToodleDo. Once you have added your accounts, you can set up a dashboard where you can view the main items from each account like Twitter timelines and Facebook news feeds.

Taurus reminds me a lot of that other great productivity application “Glimpse”; it uses the Touchpad screen to the full and allows you to quickly access the information you want all from within one application. This is like “Glimpse” for all your online accounts.

There are lots of preferences to use for tweaking your tweets or Facebook information. There is the now all important “switch off autocorrect.” There are also three other good themes to select from if you are not keen on the default theme.

All the sites that are supported work well, with links offering a dialog box when pressed to open in the browser, open within the app (a dialog window), share the URL or copy the URL. You can even open the browser directly from within the application (using the option from the menu).

The application also makes use of the notification bar, when Taurus is running in the background. You have a pin board to paste information from other apps and you can even tweet directly from the notification bar, but as the on screen keyboard given is very small I would not recommend it for regular tweets. The user interface is well designed with lots of options to change things that work best for you.

Overall, this is an excellent application and it has been thoughtfully put together. For someone like me, who has more than one twitter account and several other online accounts, this is really a useful application. There are other applications that do one thing well, but this application manages to do several things very well. If you love your online accounts then this is a must have application, it will save your time and effect.

Cons:
●     A confirmation on deleting items from the dashboard would have been useful.

Disclaimer: This post was originally posted on Internetgumshoe on April 21st, 2012.

Posted by Unknown at 7:59 PM No comments:

So, what exactly has been going on with HP and webOS? This artcile, written (mostly) by Neil Ballard, explains.

In December, HP announced a plan to contribute webOS to the Open Source Community. For many, this was HP's best opportunity to gain a meaningful foothold in the increasingly competitive mobile space. What Palm realised was that a thriving developer community was crucial to any mobile OS success and this strategy was thoroughly engaged. Now, with HP's release of the fundamental framework of webOS into the Open Source world, HP has invited developers to become involved more than ever to help rejuvenate the platform. HP laid out a set of operating principles for their roadmap:

Now, we are in September, the month of the highly-anticipated release of Open webOS 1.0, and HP has been true to their word in releasing core components of the webOS framework into the Open Source community. 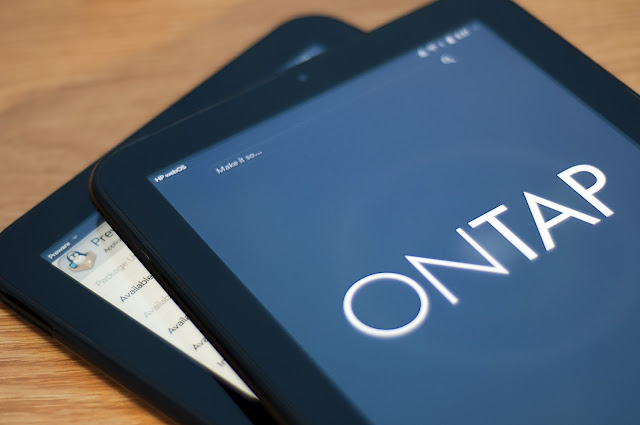 For those of you that have kept up with this project, you'll know that we're behind schedule. For that, we apologize. Not wanting to leave the community completely in the dark, we've started this blog. Through this site, you'll be able to stay updated on what's new in the webOS world, as well as read app reviews, get to know the team, and interviews with developers and the like. Even after onTap is released on your TouchPad, this site will remain, providing you with more frequent news (not to mention access if you are away from your TouchPad).

Now, for those of you who are unaware of what this is, webOS onTap is our replacement for HP's left for dead Pivot. This is 100% volunteer backed, so bear with us. The idea for onTap spurred from a post by webOS Nation forum member, GMMan. A few months ago, he posted this in the forums:


Here's an idea to throw out there: how about webOS Nation pick up Pivot so that it won't be stuck on November and we would get quality content maybe every two weeks? I looked at the download code for Pivot and it's all JavaScript, so it's easy to dispatch a patch to Preware once everything's in place. I've managed to download all the recent issues of Pivot except for #1 (dammit). It's basically a manifest, page info, a whole bunch of images and layouts, and app infos. The most recent few issues even comes with a script to generate app info from a spreadsheet. If webOS Nation can write up some material, perform layout, render into images, and host the files, we'd have a frequently updated Pivot in no time.

From there, volunteers jumped on board, hoping to keep Pivot alive by other means. Eventually, a name was chosen by the community for this replacement to Pivot: webOS onTap. Last month, a preview page appeared on the TouchPads of those who installed the patch. Unfortunately, we missed our deadline of August 2012. And now, here we are. September 2012. And alas, content! Albeit, not on your TouchPad, but we promise it will in the near future.

Without further ado, let's see what's onTap, shall we?

Find us on the web!